Today In Hip Hop History: Red And Meth’s ‘How High’ Debuted In Theaters 19 Years Ago

Today In Hip Hop History: Red And Meth’s ‘How High’ Debuted In Theaters 19 Years Ago 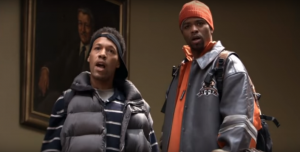 On this date in 2001, the highly anticipated acting debut of both Reggie Noble and Method Man hit silver screens around the world in the smoke-saturated stoner film How High from Universal Pictures.

You can’t go wrong when Method Man and Redman link up!  Despite the low rating it received from critics, the stoner comedy has been considered a cult classic and is stacked with quotable lines. Entertainment Weekly and the Stony Awards both gave credit to this project as far as stoner films are concerned.

How High follows Silas (Method Man) and Jamal (Redman) as two potheads who end up smoking a magical substance that allows them to ace their college entrance exam and get into Harvard.  They are immersed into the Ivy League culture and fly by with their magic smoke until it runs out and must face reality and quickly adapt before being left in the smoke.  In addition to Redman and Method Man, Mike Epps, Essence Atkins, Tracy Morgan, Cypress Hill and even Chuck Liddell all make appearances in the film.

With such a great reception from the original, a sequel was birthed featuring DC Young Fly and Lil Yachty, which had just as strong as its almost two decade old predecessor. Salute to Red and Meth , who still have continued joint success after laying a firm, high foundation in Hip Hop history!

The post Today In Hip Hop History: Red And Meth’s ‘How High’ Debuted In Theaters 19 Years Ago appeared first on The Source.